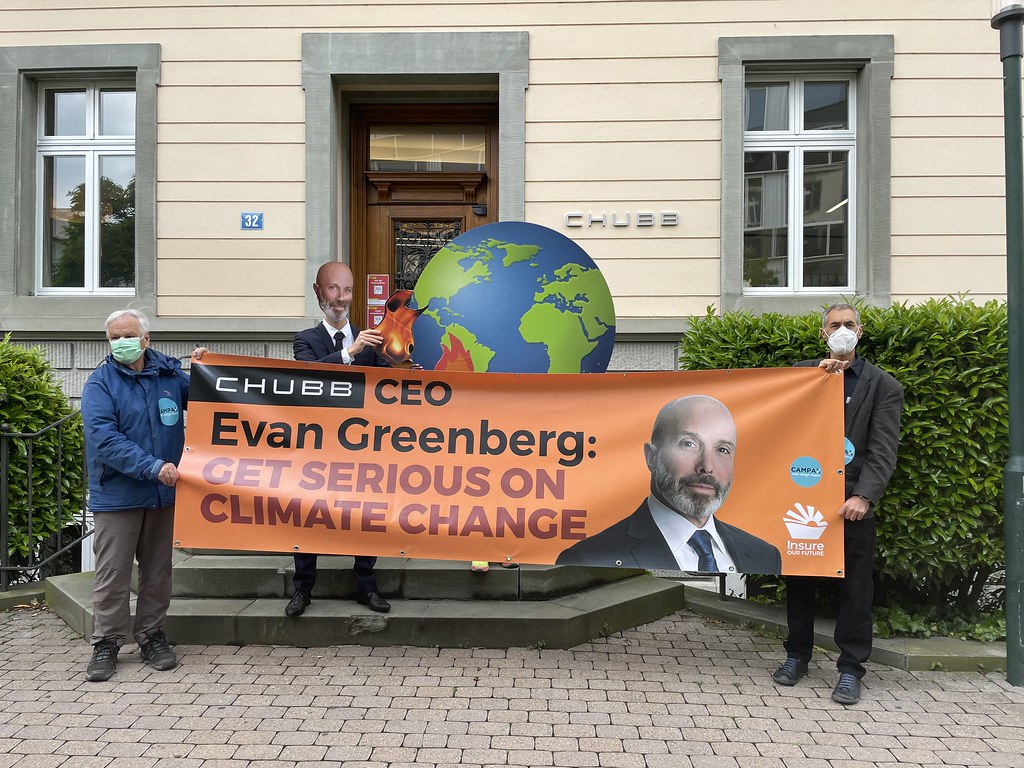 Chubb was an early climate leader among U.S. insurers. It became the first U.S. company to adopt a coal policy in July 2019, and Greenberg is one of few U.S. insurance CEOs who has been outspoken on the need for the industry to do its part on climate. Greenberg said that Chubb’s coal policy reflected “Chubb’s commitment to do our part as a steward of the Earth.”

"Greenberg simply isn’t living up to his rhetoric on climate. Providing the insurance fossil fuel companies need to keep destroying our planet is certainly not being a good steward of the Earth. We are in the midst of a climate catastrophe, and Greenberg’s continued refusal to take action means Chubb is falling further and further behind its global peers.”

The letter, which was signed by Indigenous Peoples, climate justice groups, community organizations, and public health groups, notes that Chubb has not taken a single step on climate since adopting the 2019 policy: “Through your refusal to take further action, Chubb has gone from a leader to a laggard.”

At least 26 major insurers worldwide have adopted coal policies, most of them stronger than Chubb’s. Insurers have also begun to take action on tar sands, Arctic drilling, and even oil and gas more broadly.

Chubb, meanwhile, is also among the world’s top-eight insurers of oil and gas. Chubb continues to insure climate-wrecking projects like the Trans Mountain pipeline in Canada, which has become so toxic that Trans Mountain recently applied for–and was granted–the right to hide the names of its insurers. Organizations across the U.S. and Canada are planning a week of actions at the headquarters of Trans Mountain’s insurers this June to demand that they drop the project.

Eleven insurers have ruled out insurance for the carbon-intensive tar sands sector, but Chubb has not. A new report released this week by the International Energy Agency finds that there is no room for new coal mines or oil and gas fields in our planet’s carbon budget.

"There is no excuse to support new coal, oil, and gas projects that are torching our planet. If Evan Greenberg wants Chubb to be a climate leader, he should rule out all new fossil fuel projects, like yesterday. Anything less is corporate greenwashing.”

Yet Chubb has not even ruled out new coal projects, such as the Adani Group’s Carmichael mine in Australia, which at least 35 insurers have said they will not insure. By only restricting insurance for companies that derive more than 30% of their revenue from thermal coal mining, Chubb leaves the door open to insure coal projects for massive, diversified companies.

The actions at Chubb come two days after protests targeting Lloyd’s of London and its insurers in the UK, and the day after rallies outside The Hartford and Travelers in Connecticut calling on the insurers to drop fossil fuels.

"The campaign to hold insurance companies accountable for their role in the climate crisis escalated this week with actions in the US and Europe. As insurance companies drop coal, some coal companies are unable to get the insurance they need to operate. But global laggards like Chubb and Travelers are enabling new fossil fuel projects worldwide. If they took a stand, it could speed up the transition to renewable energy. Our message is simple: stop insuring the fossil fuels destroying the planet. Insure our future instead."

The groups called on Chubb to adopt the following measures, in line with the Insure Our Future campaign’s demands:

It also calls on Chubb to commit not to insure the Trans Mountain pipeline and its expansion in advance of the August 31, 2021 renewal date.

Photos of the action in Zurich