On Sunday, October 17th and Monday, October 18th, climate campaigners from a number of groups, including the Insure Our Future campaign, Parents for Future and Fridays for Future, gathered to call on attendees of the Baden-Baden Reinsurance Conference to rule out coal from all reinsurance, including treaty reinsurance, to stop insuring all new oil and gas projects and to phase out existing oil and gas insurance in line with the 1.5C Paris Agreement goal. 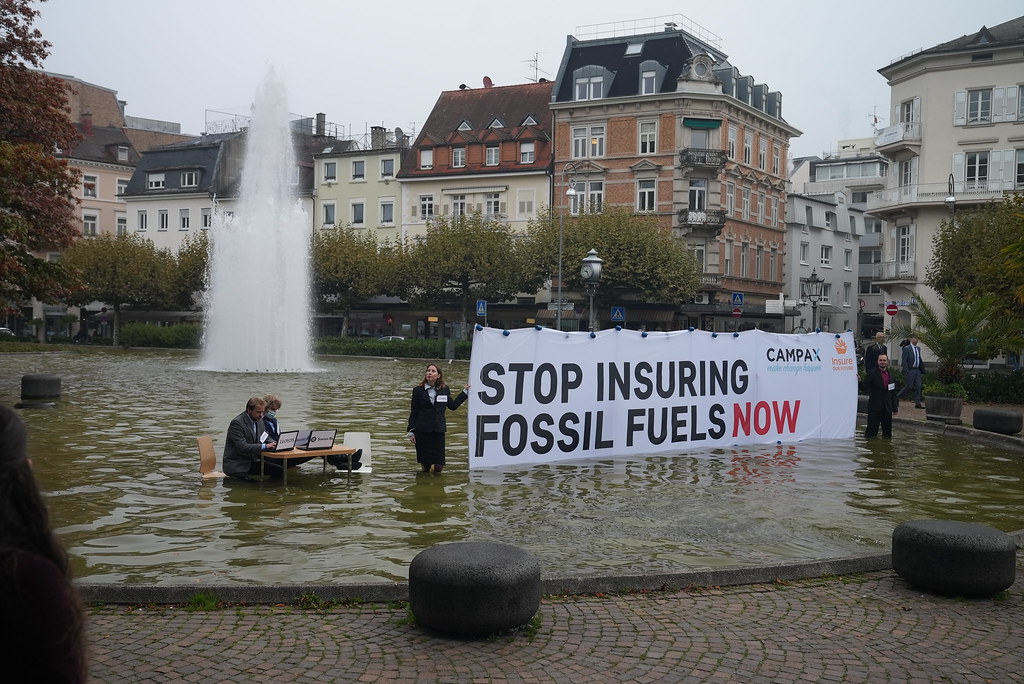 Treaty reinsurance remains a major loophole in reinsurers’ exit from coal. While many reinsurers have adopted policies to stop direct coal coverage, only a few have so far publicly committed to phase out coal from their treaty business. Swiss Re and SCOR have said they will start to do so in 2023, and Munich Re has stated that a decarbonisation strategy for treaty reinsurance is currently under development. In the meantime, they continue to reinsure highly polluting coal mines and power plants.

“The world’s biggest reinsurance companies - Swiss Re, Munich Re, Hannover Re, SCOR, MAPFRE and the U.K. Lloyd’s of London insurance market - are still reinsuring coal through companies like PZU in Poland and OZK in Bulgaria. All reinsurers must close this loophole and stop supporting coal, now.”

Burning oil and gas is one of the biggest sources of greenhouse gas emissions. Just this week, the International Energy Agency concluded that there is no justification for supporting new oil and gas projects under a net zero scenario, and phasing out current operations over time is necessary to stop a rise in global temperature above 1.5C. As society’s risk manager, insurance companies have a responsibility to act on the science and immediately stop insuring all new fossil fuel projects.

“Contradicting their own climate commitments, insurers are profiting from climate destruction by continuing to underwrite the expansion of the oil and gas industry. Allianz, AXA, Munich Re, SCOR and Zurich’s continued support of new oil and gas projects is completely at odds with the Paris Agreement and ignores science. The weight of evidence continues to grow: It’s time for action.”

Campaigner at Parents for Future Poland

“We are desperate, we are furious, and we will not accept that the future of our children be ignored by fossil fuel insurers like PZU. Reinsuring coal and underwriting new oil and gas that directly contribute to the destruction of life on our planet and at the same time preaching about caring for the life, health and future of children is a clear sign of hypocrisy.”

Lloyd’s Munich Re Swiss Re