Lloyd’s must wash its hands of coal and tar sands

Today, in an activity that marks the launch of a global campaign, Insure Our Future takes global climate concerns to Lloyd’s of London’s front door as it reopens its underwriting hall.

As insurance professionals enter the building, campaigners welcome them with the message that Lloyd’s market must ‘wash its hands of coal and tar sands’ insurance to protect the climate. 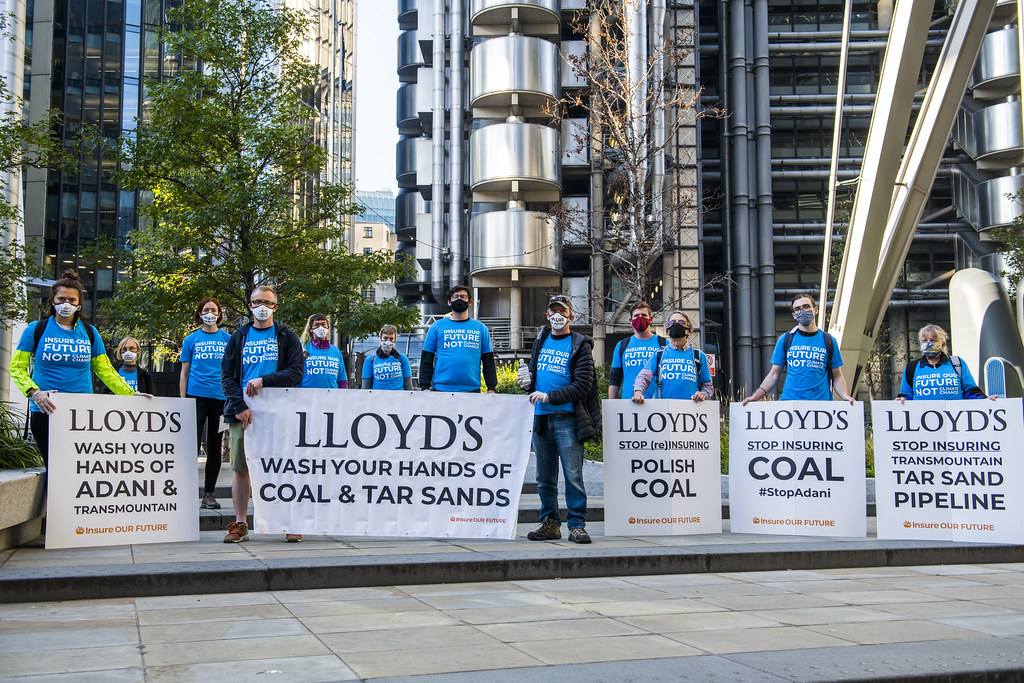 Since 2017, 19 global insurers have restricted insurance for and investments in coal and tar sands. Meanwhile, Lloyd’s has stepped in to cover various controversial fossil fuel projects – including the proposed Adani Carmichael coal mine in Australia, the Trans Mountain tar sands pipeline in Canada, and reinsurance for Polish coal mines.

Coal is the biggest single source of carbon emissions. The climate science institute Climate Analytics calculates that holding global temperature rise to 1.5°C will require global coal combustion to peak by 2020, fall by 80% below 2010 levels over the next decade, and end before 2040.

Tar sands are one of the highest-carbon sources of oil on the planet. No new tar sands projects are consistent with the Paris climate targets and high production costs mean that any new investments risk becoming stranded assets, according to financial think tank Carbon Tracker.

Campaigners have criticised Lloyd’s for failing to take meaningful action on climate change, and undermining the positive climate action of other insurers. A report by the Insure Our Future campaign in 2019 found that Lloyd’s has become the ‘insurer of last resort’ for fossil fuel projects.

In November 2017, Lloyd’s adopted a policy to restrict investments in coal, but this was criticised by ClientEarth and Insure Our Future for covering just 2.5% of its market, and thus leaving Lloyd’s “free to continue business as usual”.

"Lloyd’s needs to act on the science, follow other leading insurers and stop providing the insurance cover that supports and enables climate destroying coal and tar sands projects. Lloyd’s has both a moral imperative and a long-term self interest to act as society’s risk manager and stop being a stain on the European insurance industry.”

More than 70 financial institutions, including 18 insurers, have already withdrawn from or committed not to be involved in the Adani Carmichael coal mine, and it has been widely reported recently that a number of leading European insurers, including Talanx and Zurich, are not renewing insurance for the Trans Mountain pipeline.

Spokesperson for the Stop Adani campaign

"Lloyd’s must refuse insurance for Adani’s deeply unpopular and environmentally destructive Carmichael coal project. Lloyd’s needs to act on the climate crisis, not act as the last refuge for climate wreckers like Adani to secure insurance. Insurers who associate with Adani’s toxic brand cause massive damage to their reputation.”

A coalition of 140 groups representing 24 million people wrote to Lloyd’s urging it not to renew its insurance for the Trans Mountain pipeline due to its contribution to the climate crisis, Indigenous rights violations and environmental justice concerns. The existing policy expired on 31st August.

"Trans Mountain put in the existing line without the consent of impacted First Nations and we have said ‘no’ countless times to the proposed expansion. As Indigenous peoples, we are stewards of our lands and waters. We have jurisdiction over activities that happen in our territories, and we don’t want them ruined by oil spills. We will continue to advocate against the insurers, like Lloyd’s, that continue to back the Trans Mountain pipeline and its expansion, and call on all insurance companies to adopt policies on respecting Indigenous rights and title and limiting the impacts of climate change.”

"Tar sands are some of the dirtiest, most carbon intensive oils in the world. So when a company like Lloyd’s chooses to continue to support projects like the Trans Mountain pipeline, which will grow the tar sands and speed up climate change, what they are really choosing to do is put their short term profits ahead of everyone else's right to a safe planet.”