The 9 metre banner – with the message ‘Bruce: Fossil Fuels are just not cricket’ – was displayed during the women’s one-day international at Lords, the home ground of Marylebone Cricket Club. It was part of a weekend of cricket action by Mothers Rise Up that began on Friday with a cricket match – with a giant wicket and cricket ball – outside Lloyd’s HQ in London. 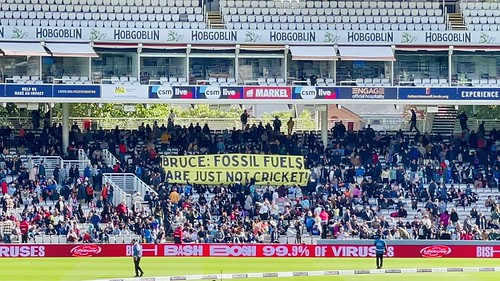 "Fossil fuels are wrecking the climate, lives of millions of people around the globe, and our children’s future. Many cricketing nations are already feeling the impact – with devastating floods in Pakistan and Australia and crippling heat waves in India and the UK – and cricket will be one of the worst affected sports. Lloyds must stop insuring fossil fuel projects that will lock in catastrophic global heating of more than 1.5C."

Many cricketing nations are on the front line of the climate crisis. The heat waves which gripped India and Pakistan earlier this year were made 30 times more likely by climate change while climate change increased the intensity of monsoon rains in Pakistan that have left a tenth of the country underwater, killed nearly 1500 people – including over 500 children – and destroyed 1.8 million homes. Climate change also made the UK heatwave in July more intense and at least 10 times more likely.

A report by the Climate Coalition found that cricket will be the sport that is hardest hit by climate change with wetter summers disrupting matches in the UK and cricketers exposed to dangerously high temperatures in countries such as Australia and India.

Stephen Fry, who begins a 12-month term as president of Marylebone Cricket Club in October 2022 – working alongside Carnegie-Brown – released a video message in support of Extinction Rebellion in June saying: “This is the most serious crisis humanity has ever faced….something has to be done about fossil fuels, most of all about our insatiable appetite for them.”

The International Energy Agency says there can be no new fossil fuel expansion if we are to keep global temperatures from rising above 1.5C. Yet, Lloyd’s has no plans to stop insuring new oil and gas exploration and has refused to join 15 other insurers and reinsurers in ruling out support for the proposed East African Crude Oil Pipeline. While companies such as AXA, Allianz, and Swiss Re have already stopped insuring the most damaging coal, tar sands and Arctic energy projects due to their colossal climate impacts, Lloyd’s members may continue to provide cover until 2030.

"Bruce Carnegie-Brown must go out to bat for our children – and for cricket – by issuing clear guidance to all Lloyd’s members that they must immediately stop insuring new coal, oil and gas projects."