Mums, dads and children made a Father’s Day appeal to Lloyd’s of London Chairman, Bruce Carnegie-Brown, to stop insuring fossil fuels at a protest outside the companies’ London headquarters today.

The parents delivered a giant oil drum of dead flowers and an oversized Father’s Day card to Carnegie-Brown in a direct appeal to the father of four to stop Lloyd’s legacy of climate destruction and help protect all our children’s future. 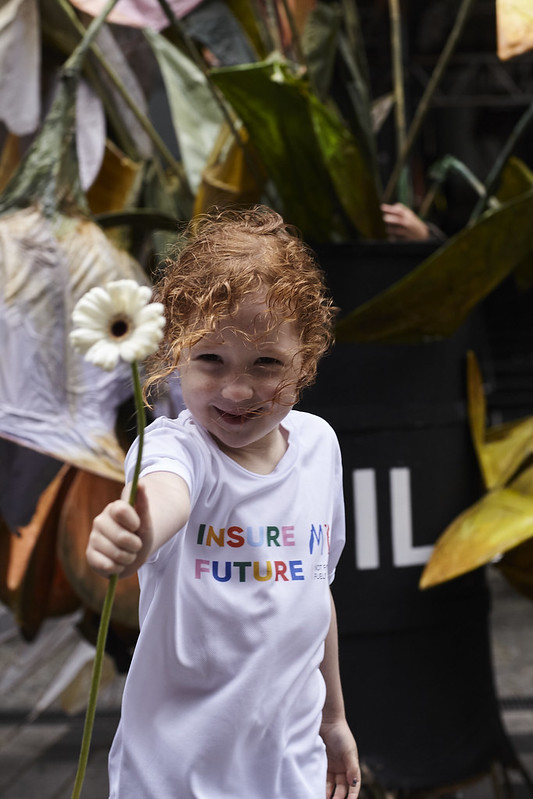 mother and organiser at Mothers Rise Up

“As one parent to another, I am urging Bruce Carnegie-Brown to do what is right by all children – stop insuring dangerous fossil fuels and insure our kids' future instead. We want our children to grow up on a healthy planet in balance with nature  –  that doesn’t seem too much to ask.”

Lloyd’s insures around 40% of the global energy market, including projects such as the Adani coal mine in Australia and the Trans Mountain oil pipeline in Canada. It has also refused to rule out insuring a proposed coal mine in Cumbria. While companies such as AXA and Swiss Re have stopped insuring coal, tar sands and Arctic energy due to their climate impacts, Lloyd’s won’t stop providing cover until 2030 and has no plan to exit oil and gas.

Last week UN Secretary General Antonio Guterres urged insurers to phase out fossil fuel insurance, and a recent report from the International Energy Agency concluded that there should be no new oil, gas or coal developments if we are to limit global temperature rise to 1.5°C.

mother and organiser with Parents for Future UK

“Corporations and governments have wasted decades by delaying climate action. We are now out of time. Lloyd’s must stop providing insurance for all coal projects immediately and quickly phase out support for oil and gas.  Without insurance these damaging projects cannot go ahead.”

The groups behind the action, Mothers Rise Up and Parents For Future are part of a fast-growing global movement of parents who are taking a stand against dirty energy and the companies that back them for the sake of their children’s future. This week Polish parents’ group, Rodzice dla Klimatu, also held a protest at the Annual General Meeting of PZU, one of the largest financial institutions in Poland and a member of Lloyd’s insurance market. PZU underwrites 85% of coal mining in Poland including theTurów open pit coal mine in the south-west of the country.

"Poland is one of the most polluted countries in Europe. Burning coal is damaging Polish children's health and destroying their future.  We are calling on those who hold power at  PZU and Lloyd's to think and act like parents. What do they want their legacy to be? Dirty harmful coal or creating a better world where our children will be safe?"