The insurance industry talks a big game on climate but it continues to invest in coal and other fossil fuel projects, so we joined forces with Divest London and UK Tar Sands Network  to take a message to their big global conference in London last month.

The ‘Global Resilience and the Role of Insurance’ forum in London took place at the fortress-like Park Plaza Hotel in Central London, a stone’s throw from Westminster Bridge. Since the events that shook the British capital this summer, the Grenfell fire and recent attacks including one on Westminster bridge, the security at the hotel was unusually high. Combined with the building’s location right across the river Thames from the Houses of Parliament, and in middle of a roundabout, this meant that when planning the action we had little expectation of achieving much more than getting a banner up outside the hotel (which we did anyway). 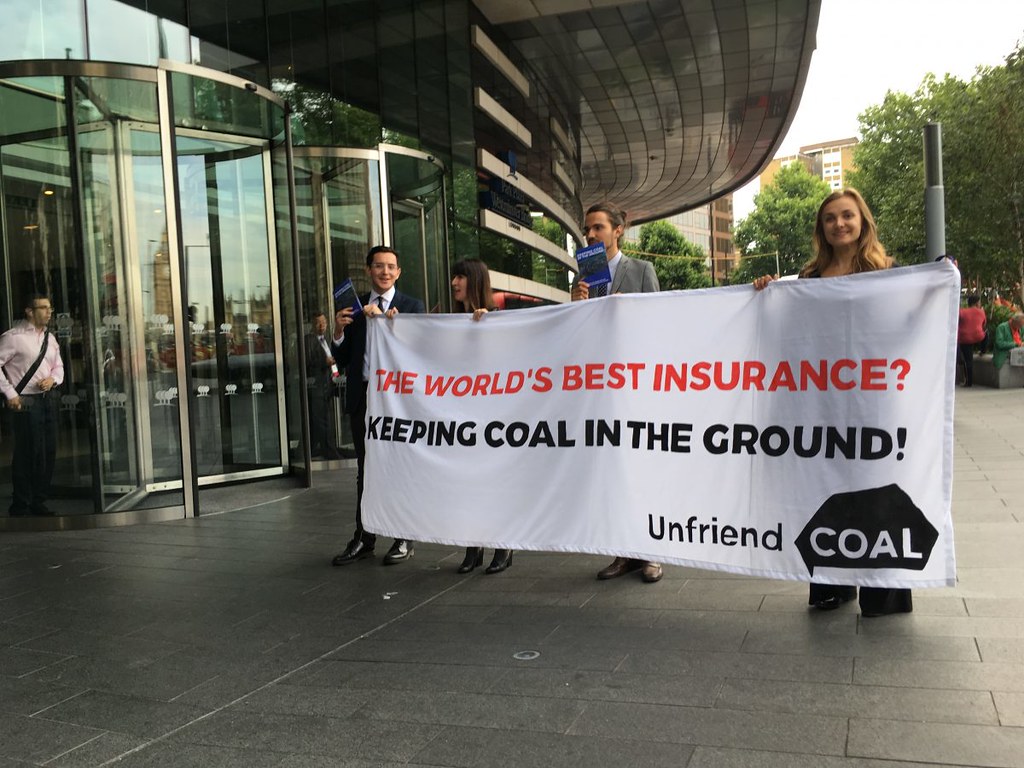 However, while tickets to the slick event range in the thousands of pounds, we were happy to find the combination of our shiny shoes and glossy brochures gave us free entry and allowed us to slip into the insurers’ breakfast almost unnoticed, chatting risk and coal over some brioche.

The insurance industry was one of the first to acknowledge the risks of climate change, though it still continues to underwrite coal and fossil fuel projects. However, the insurers’ keen interest in risk was quickly apparent – once we unfurled our banner inside the venue we found we actually got the ear of the attendees who stopped sipping on their morning coffee to listen to what we had to say. In a brief statement we made our demands to the insurance companies clear:

We were happy to see many of the attendees take our brochures, until security took over – we were escorted out and one member of our group was banned from the £400.00 night  hotel. After a sigh of relief that no arrests were made, we took to Twitter to find a stream of favourable tweets with images of the action and comments about our sleek attire and pertinent information.

We were glad to have made such an impression, all despite the complaints from security about how hard we made it for them to spot the activists in the crowd. All in all, it felt like a very productive intervention with so much literature distributed to the forum, the positive engagement online and discussions with participants throughout the rest of the forum.

There is a powerful base of organizations and activists who have been pushing for divestment from coal, tar sands and highly polluting fossil fuels in the London financial centre. Taking action on the insurance companies who are underwriting these destructive coal projects feels like a natural evolution of the divestment movement.

Every time a new fossil fuel project is built, it needs to be insured. Stop the insurance, stop the project. This is why the insurance sector needs to #UnfriendCoal. This is why it needs to transition away from underwriting coal and highly polluting fossil fuels immediately and shift to scale up investments in renewable technology. Until then, we will just keep showing up, with shinier shoes and bigger numbers!