Mothers have created an alternative advent calendar for Lloyd’s Chair Bruce Carnegie-Brown to highlight the impact of the climate crisis and urge the company to stop insuring fossil fuels. The calendar was hand delivered by three of the mothers to Lloyd’s of London on 30th November. 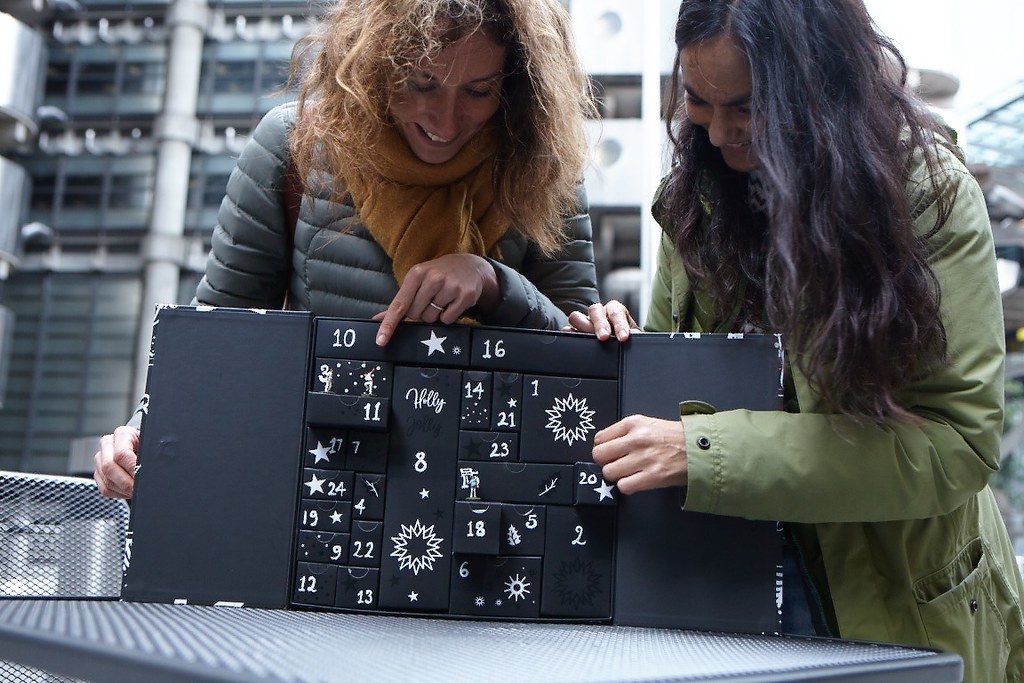 The calendar is based on themed advent calendars which allow children to create a miniature world of their favourite characters. In a nod to Carnegie-Brown’s role as chair of the MCC and well known love of cricket, the alternative advent calendar plays out a cricket match disrupted by climate change.

Lloyd’s insures around 40% of the global energy market, including dangerous fossil fuel projects such as the Adani coal mine in Australia and the Trans Mountain oil pipeline in Canada that many of its counterparts won’t touch because of their colossal climate impacts. Despite issuing an ESG policy back in December 2020, Lloyd’s has still not mandated any of its members to stop insuring the most damaging fossil fuel projects such as coal, tar sands and Arctic energy.

The calendar features a miniature cricket pavilion, scoreboard and figurines of cricketers behind its 24 windows. The windows also contain a model tar sands pipeline, coal power station chimney stacks and coal to be added to the scene. Protestors holding placards with slogans saying “Insure Our Kids’ Future” and “No Greenwashing”, fires and heat-exhausted cricketers also feature to remind Lloyd’s of London of damage being done by its insurance of dangerous fossil fuels.

Starting on 1 December and each day from now until Christmas, the parents will share one new advent scene on their social media channels, tagging Lloyd’s and Carnegie-Brown. A final video compilation of all the advent scenes will be sent to Lloyd’s. The delivery of a physical advent calendar to Lloyd’s means that Carnegie-Brown has the option to play along and create or re-create the scenes day by day as they unfold on social media.

The mothers organising this action are from Mothers Rise Up and Parents For Future UK, two groups of parents taking action on climate. The calendar was crafted and painted by hand by Chryso Chellun, a mother, artist and climate activist.

"This Christmas the gift I want to give my child is the chance of a healthy, safe future, so I've been immersed in the painstaking creation of a miniature world in the hope that it will help change a few minds.

“We're trying to appeal to Bruce's conscience. He is a father of 4. Climate change will impact his family and is already affecting so many children all over the world. He is the chairman of Lords cricket club and we know he loves cricket, which is a sport that will be on the frontline of sporting casualties as our world warms.

“Lloyd’s makes grand announcements but it doesn’t take the real action that is needed. It’s classic greenwashing. Whatever it takes for Lloyd’s of London to stop providing insurance for all coal, tar sands and Arctic energy projects and quickly phase out support for oil and gas is what we're asking for, nothing less. Without fossil-fuel insurance these damaging projects could not go ahead. Bruce, please do the right thing for all our kids!”

The parents urged Lloyd’s to listen to experts such as the International Energy Agency, which has warned that limiting global heating to 1.5°C means no investments in new fossil fuel supply or other infrastructure that expands fossil fuel production. Instead, the production and use of all fossil fuels need to decline rapidly.

While companies such as AXA and Swiss Re have stopped insuring coal, tar sands and Arctic energy and have started to also restrict insurance for oil and gas development due to their climate impacts, Lloyd’s, despite joining the Net Zero Insurance Alliance (NZIA) continues to insure all fossil fuels without restriction.

Mother and organiser with Parents For Future UK

“Experts like the International Energy Agency are calling time on fossil fuels. Lloyd’s needs to listen and act. We’re fed up with fine words and paper commitments. We want real action. We all want a safe and habitable planet for our children. The best present Lloyd’s could give our children and the planet this Christmas is to stop insuring fossil fuels.”

Earlier this year, ahead of Father’s Day, parents from Mothers Rise Up and Parents For Future UK protested outside Lloyd’s of London, with a huge Father’s Day card addressed to Bruce Carnegie-Brown urging him to insure their children’s futures, not fossil fuels. Ahead of the action they sent him traditional Father’s Day gifts – a mug, inscribed cricket bat and socks – all urging him to stop Lloyd’s insuring fossil fuels. They hope their follow-up Christmas action will persuade Lloyd’s to take the action needed to protect all children from dangerous climate change.